The Reality Of Zionism 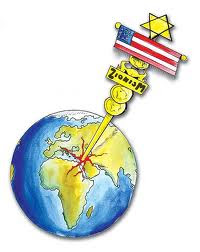 1. World opinion is to be divided into two categories. The first category is the category of governments, and the second category is the category of citizens. In the framework of the first category, the overwhelming majority of governments have supported the Israeli massacre of the Freedom Flotilla, because the majority of governments are under the influence and/or subversion and/or control of the Zionist lobby. In that same framework, whatever government officials have offered a condemnation of the ‘attack,’ have not specified who exactly they’re condemning, and this, as aforementioned, is the result of the Zionist lobby. Again, in the same framework, the minute amount of government officials that have actually condemned Israel itself, their condemnations ring hollow, for they will not be backed up with action. In the framework of the second category, it is becoming increasingly evident, that populations of the world, Muslim and Jewish, Christian and Hindu, Black and White, Latino and Asian, lower-class and middle class, have lost their patience with the constant tyrannical, genocidal, and quite frankly, insane behavior of the illegal occupational entity known as Israel. The people are tired of forking over their tax dollars to a state that murders, steals, occupies, rapes, tortures, imprisons for no reason, and now, pirates, when their money could go to their failing social and economic crises. The people are tired of another people, just like them, being unjustly treated in a fashion worse than animals, for 62 years. The people are weary of their governments who continue to lend their irrational, unwavering support to this criminal fraud of a nation. The people, finally, seem to understand the severity of the crimes against the Palestinians, and it seems, they finally want an end to it. When world opinion isn’t divided into these two diametrically opposed categories, then that phrase, is simply a generality being used to mislead on behalf of Israel and its cohorts in America and Britain.

2. The musical acts that have canceled their summer tour stops to Israel are not doing so because condemning Israel is some sort of beneficial and marketable trend that can contribute to their musical careers, considering the majority of the record labels are also owned by Zionists; they are doing so because they find it reprehensible that peace activists were murdered in cold blood in international waters by commando units in the middle of the night with the blessing of a deranged government. The protestor who creatively drew a skull and crossbones over the word ‘Israel’ was doing so because it is the symbol of piracy, and Israel committed an act of piracy, again, in INTERNATIONAL WATERS. The Zionist entity stole monies, credit cards, identifications, belongings, and the very aid itself, and to this moment has not released any of it, or accounted for any of it. That. Is Called. Piracy. In addition, this was a humanitarian ship from Turkey, approved by the Turkish government, carrying aid to a starving people in Gaza, due to the hellish illegal blockade imposed on the Palestinians of Gaza by Israel in 2006. This escalates the crimes of murder and piracy to an outright act of war, due to it occurring in international waters. Helen Thomas, the courageous White House Press veteran who has challenged the unscrupulous behavior of presidents for what seems like the beginning of time, never used the word ‘Jew.’ She was asked if she had a message for Israel, and she responded that ‘they should get the hell out of Palestine. Remember, those people are occupied.’ This is not ugly. This is beautiful, because it is the truth. Al Nakbah is one of the worst crimes in human history, and the catastrophe continues to this day. The UN did absolutely NOTHING to protect the Freedom Flotilla, and despite whatever pitiful condemnations they might have released, they haven’t done anything to punish Israel for its miserable and murderous crimes, as they have not done since Israel’s inception. The Obama administration, which is staunchly Zionist, has not condemned Israel in the slightest, and vetoed the UN resolution for an independent investigation, instead suggesting that Israel should investigate its own criminal conduct. Rahm Emanuel, Obama’s violent and vile chief of staff and the son of a Zionist terrorist, was in Israel just a few days before the Freedom Flotilla massacre took place, to give the Obama administration’s approval to the Netanyahu government to carry out the assault.

3. The accusation of ‘The Jews being scapegoated again’ is not only tiresome, but pathetic. In fact, it is not only pathetic, but pathologically disturbed. Anybody who is cognizant of the Palestinian plight, and who is educated about Zionism, does not need to hear the equally tiresome discourse of criticism of Israel, or Zionism, or Zionist organizations is tantamount to an attack on the Jews. Israel Shahak (RIP), Ilan Pappe, Joel Kovel, Gilad Atzmon, Michael Hoffman, Norman Finklestein, and Stephen Lendman all vehemently criticize Israel, Zionism, Zionist organizations, and Israeli policies, and they are all Jewish, some are also Israeli. Anti-Zionism does not equal Anti-Semitism, and the repetition of this is getting as old as the accusation itself. Anyone that charges a critic of Israel with anti-Semitism is simply displaying an exuberant amount of cowardice, lack of knowledge, and subservience to the Zionist entity. Israel has absolutely, positively no right to exist. It is a nation founded upon racism and ethnic cleansing, and it only continues to survive to this day by growing more and more oppressive with each passing moment. Such a nation can only fall to the pits of Hell when it is at its end. Anyone that recognizes Israel’s right to exist, condones Al Nakbah, condones the continuing murder, occupation, and rape of Palestine, and condones Israel’s rampant criminality.

4. The apartheid state of Israel is worse than apartheid South Africa. The blockade of Gaza, the separation wall appropriately, and menacingly named ‘The Iron Wall,’ the constant home destruction, the aquifer theft, the thousands of Palestinians (including children) held in Israeli prisons without charge, the abuse of prisoners ranging in physical to psychological to sexual, the inability to move without proper identification, the denial of the right of return for refugees, and the theft of farmland are only some of the brutal policies enforced against the Palestinians by Israel. The white supremacy comparison is accurate, considering, Zionism is a European ideology, and the Ashkenazi Jews who founded this ideology are not descendants of biblical Hebrews like the Mizrahim (Arab Jews) are, they are descendants of the Khazars, a ruthless pagan empire that converted to Judaism for political purposes in 741 A.D. The Israeli-Palestinian conflict has never been a territorial dispute, this is a disgusting Zionist lie propagated intensely and often in the media to brainwash and confuse. The land belonged to Palestine. It was stolen by Zionists. There is nothing complicated or intricate about it. Muslims, Jews, and Christians lived in harmonious brotherhood and sisterhood under Muslim rule. All of that changed with the birth of Zionism.

5. This is not about Hamas. It never was about Hamas. This is about unarmed peace activists being murdered in international waters. This is about a people being starved, literally to death, by an illegal blockade imposed upon them because the people did not do what the occupier told them to do, which is vote for the puppet government that is working with their tormentor. Thousands of rockets? This is absurd. The minuscule amount of rockets that were fired into Israeli towns by Hamas were a response of defense, after Israel broke the cease-fire, which started the inhumane and genocidal white phosphorus bombardment of Operation Cast Lead that murdered 1,440 innocent people including 431 children. It left Gaza devastated. And due to the illegal blockade, construction materials cannot reach the government to rebuild, therefore leaving the people in something worse than a concentration camp.

The massacre of the activists aboard the Freedom Flotilla (may they all rest in peace), the capture of the activists aboard the Rachel Corrie and confiscation of materials on it, and the threats against the Lebanese and Iranian ships set to sail to Gaza are the most recent incidents of evil that have been a part of Zionism’s history since its birth. From the assassination of Lord Moyne in 1944 by the Stern Gang, to the King David Hotel bombing carried out by Irgun, to the Deir Yassin massacre and the assassination of Count Folk Bernadotte also by the Stern Gang in 1948, to the Qibya massacre by Ariel Sharon in 1953, to the Lavon Affair in 1954, to the Kafr Qasim and Khan Yunus massacres in 1956, to the attack on the USS Liberty of 1967, to the Kawnin massacre of 1975, to the Bint Jbeil massacre of 1976, to the Abbasieh massacre of 1978, to the Sabra and Shatilah massacre in 1982, to the Beirut barracks bombing by Mossad in 1983, to the massacre at holy Al Aqsa in 1990, to the psychotic assault of Baruch Goldstein in 1994, to the shelling of Qana in 1996, to the diabolical and destructive Mossad operation on 9/11, Israel has only known one policy: a policy of fear and terror. In between the Zionist entity’s massacres, assassinations, and organ smuggling schemes, it continues its everyday activities of the longest-running occupation on earth other than occupied Kashmir. Mr. Steele has the audacity to say the Palestinians ‘advertise’ themselves as occupied. Mr. Steele has the audacity to say ‘Israel does not seek to oppress or occupy and certainly not to annihilate.’ And Mr. Steele has the audacity to say, that Palestinians, and the Muslim world are not formulating our opinions of the Zionist entity because of evidence and rational thought, but hatred. If Mr. Steele thinks such wonderful and delusional fantasies are accurate, then Mr. Steele should go live in the largest open air prison in the world known as Gaza. And after he endures a few days without clean water, harsh breathing conditions due to carbon monoxide from leaking generators damaged in Operation Cast Lead and leftover white phosphorus fumes from the same operation, and lack of nutrition due to the inability to acquire healthy food because of the blockade, Mr. Steele can look in a mirror if he can find one that isn’t shattered from Israeli aggression, and ask himself, "Why was I so blind to the reality of Zionism?"