Everyday is 3ashoura, everyday is Karbala, ya 7ussein, we were born from your breath/Warrior of the highest order, a glorious lion’s heart that roars in your chest/Martyrdom over humiliation, we long for the pureness of death/With no fear or pain, we fight against the bane in your name, ya 7ussein, ya 7ussein, this is for the oppressed/For the truthful mother leaving her abusive husband to protect her kids/For the Kansas girl whose parents when she reverts to Islam, works the hijab, they just will not let her live/For the crack fiend cured now, close to the Supreme Lord (SWT) now since he gave up the drugs/Ya 7ussein, you taught us that the hate is too weak to reign against the greatness of love/

Ya 7ussein, we now fight the successorship of the wretchedness you battled when you outwilled Yazid/Nihilist Hollywood and Zionist Lobby hoods, can’t break my will or kill my dreams/of exposing and then overthrowing your plots/This is for the Palestinian child holding a rock/and throwing it though the tank approaching told him to stop/From Nabi Sale7 to Tulkarem to Bil3in/For the Syrian fighting so furiously to make the conspiracy bleed, leaving all the Gulf corrupters harmed/For the Lebanese ladies undaunted even after their sons are martyred by unexploded Israeli cluster bombs/Ya 7ussein, ya 7ussein, we’re united like the light of your companions on Euphrates, we’ll defend you, into the dark as we march to crush Dajjal/

Ya 7ussein, I can feel your blaze, it is molded in the stars/Brigades to struggle against the invaders’ trouble are named after Ali Akbar, Ali Asghar, Muslim, Abbas, Aqeel, their pain is real, we feel it as the soldiers of ALLAH (SWT)/Undoing the ruin the hypocrites have engaged in, they are slaves to the rulers who are oppressing the Ummah, they are doomed in their schemes/Ya 7ussein, it is those who oppose the oppressor like you, who are truly mouja7ideen/We abide by the guidelines of Al-Wa7id (SWT) as we make our moves/We are the children of Kufa, al-Quds, Damascus and 3aytaroun/And we refuse to go down or be silenced/Ya 7ussein, in your name, we will never bow to the tyrants/ 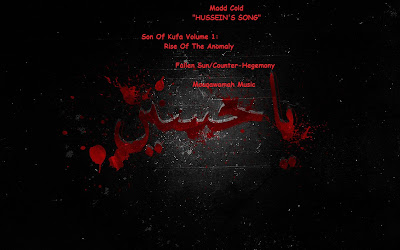